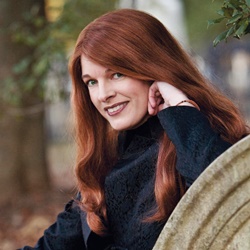 Having an addiction to all things paranormal as we do, it was natural to pick up Harrison because of the various supernatural elements in her books.

Kim is the author of a number of urban fantasy books and young adult fantasy like the Rachel Morgan series and Madison Avery.

Kim was born and raised in the upper Midwest. After gaining her bachelors degree in the sciences, she moved to South Carolina, and has been there since.

When not at her desk, she is most likely to be found chasing down good chocolate, exquisite sushi, or the ultimate dog chew. (For her dog.)

Keri Arthur Books You Should Read

Keri Arthur has made a name for herself in the paranormal romance genre with the Riley Jenson series and a strong knack for writing action packed books with strong, sexy characters that you just can't resist.

If there's one thing for sure, Christine Feehan is considered one of the queens of the paranormal romance genre. As far as we are concerned, that title is well earned.

Jacquelyn Frank has a number of books out that I recommend reading. If you like steamy and romantic, but not just another vampire romance you're in for a treat with this one. She's got an ecclectic mix of Otherworldy heroes which varies from book to book.