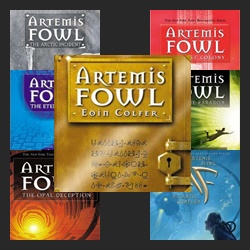 The series is written about the adventures of a young criminal mastermind whose genius is used for nothing short of pulling off some of the most incredible criminal plots and schemes the world has ever known.

This series is chalk full of fun, witty characters and exciting adventures. It has the capability to enthrall readers of all ages and keep those pages turning until the only thing left to do is read it again!

And just fyi... it's just as good the second time around! 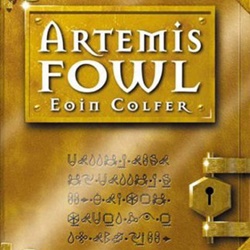 Artemis Fowl and his bodyguard, Butler, devise a plan in book one to capture a fairy so he can prove the existence of fairies and hold one ransom for gold.

Ultimately, the goal is to use the gold he gets from the fairy kidnapping to restore his family's wealth. And the first thing he's decided he needs to get done?

Blackmail an unknowing sprite into giving up her copy of the fairy holy book, The Book of the People. If Artemis can decode the book he might have a decent shot at catching a fairy to use for ransom, and his best shot at getting his hands on that gold.

Genius he might be, but perfect? Not quite. He certainly gets his hands on a fairy, but she's not the cute, passive little fairy you might expect. She's a trained officer of the LEPrecon Unit, and Commander Julius Root will stop at nothing to get her back. When he and the LEPrecon unit arrive, Artemis and Butler are in for much more than they ever could have anticipated.

Kids will love the playfulness of the characters and the fun world Eoin Colfer created within this series. Though it was written for kids, the story is a fast paced, easy read that will keep readers of any age entertained and hungry for more. It is highly recommended for anyone who likes fun and adventure! 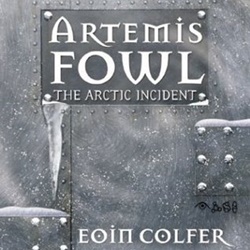 While away at boarding school in Ireland, Artemis Fowl receives an urgent letter via email from his father.

This is the first anyone has heard from him since he was kidnapped more than three years ago, while attempting to rid the Fowl family of their illegal past and move their assets into legitimate enterprises.

Now, Artemis junior must work with his former enemy, Captain Holly Short, if he has any chance of saving his father who- until now- he thought was already dead.

Captain Holly Short of the LEPrecon fairy police unit has been placed on stakeout duty as punishment for letting Artemis get his hands on a hefty portion of the fairies' gold.

Bored out of her mind she's more than willing to help Artemis save his father in exchange for his help stopping a goblin revolt. The two shortly set out on an unforgettable adventure that pushes them both to their limits and almost costs them their lives. 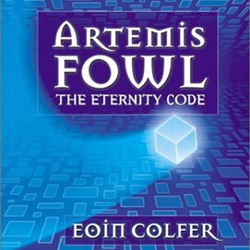 Artemis Fowl plans to straighten out his act- as soon as he finishes his most brilliant criminal scheme yet! But when things don't go quite as planned, Artemis lands himself and Butler in a heap of trouble.

Artemis has built a super-computer, 'C Cube', that is built from stolen fairy technology and more advanced than any piece of human technology ever created.

Once again Artemis needs the help of his former enemies, Captain Holly Short of the LEPrecon fairy police unit to save Butler's life and a pickpocket dwarf named Mulch Diggums.

Unfortunately, he's going to need a miracle to get him back and give Spiro a taste of his own medicine and Artemis's luck may have already run out.

Even more, he has to agree to have his mind wiped after helping the fairies recover the stolen technology.

The Eternity Code is a thrilling adventure, full of fun, witty dialogue that readers will devour just as hungrily as the first two books. 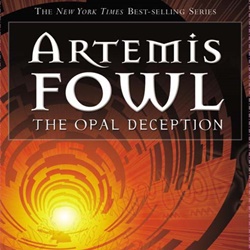 After his last adventure, Artemis Fowl had his memory wiped of the fairies' world belowground and helping them retrieve their stolen technology.

Unfortunately any goodness he previously learned was wiped away along with those memories and Artemis has now reverted back to his former life of criminal scheming.

In the Opal Deception, Artemis is in Berlin, Germany, preparing to steal a famous, very well guarded painting from a bank.

What he doesn't know is that he's being watched by an old rival and his most cunning enemy- Opal Kaboi- who has spent the last year in a self-induced coma- planning revenge on everyone who crossed her. And young Mr. Fowl is at the top of her list.

Once again it's up to Artemis to keep the fairy and human worlds from colliding, only this time, he faces an enemy who may very well have outsmarted him.

The Opal Deception is a fantastic addition to the series, and yet another witty, fast paced chapter in Artemis's adventures. It is recommended for young adult fantasy fans, middle readers, and anyone who enjoys a good, fun read.

Artemis Fowl is back and better than ever!

In this chapter of the story he's got to rely on his former, misguided ways to help save the fairies from exposure and war with a Demon whose bent on invading the humans.

Thousands of years ago, the fairies and humans went to war over the island of Ireland.

When the fairies realized they had no chance of winning, all the fairies moved belowground... except for the Demons of course.

Instead of surrendering like the rest of the fairies, the Demons used a magical time spell to move their colony into a time warp where they have been planning their revenge on humans for decades.

Now the spell is unraveling and the Demons are popping up all over the Earth, threatening to expose all of fairy kind to the humans once again.

To predict when the next demon will pop up and where, the fairies must decipher complicated temporal equations that even Foaly can't understand. But Artemis can.

And when a confused demon imp materializes in a theater in Sicily, Artemis is there waiting to meet him... unfortunately someone else is too.

A twelve year old girl who has uncovered the secrets of the fairy world and solved the equation just like Artemis has.

A newly reformed Artemis must take matters into his own hands and rely on his former scheming self to save the fairies from exposure and a Demon warlord whose army is poised and ready to invade the human world. 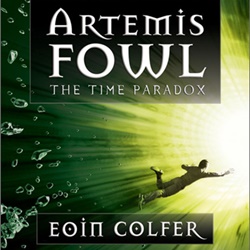 Artemis Fowl has been stuck in a time warp for the last three years and has returned to a life far different than the one he left behind.

Now that he's back, unforeseen circumstances arise and force Artemis to face his most cunning adversary yet... himself at age 8!

He's an older brother now, with two younger, twin brothers to whom he teaches what's important in life.

But when his mother falls fatally ill and the only hope she has lies in the brain fluid of an African monkey- the silky sifaka lemur, Artemis travels back in time in order to prevent her death.

Unfortunately, the silky sifaka lemur that he needs to save her is one that Artemis himself forced into extinction eight years ago.

And traveling back in time brings him face to face with his most dangerous nemesis yet... an eight year old version of himself.

With Holly Short and Mulch Diggums by his side, Artemis struggles to right his wrong and stop destiny in its tracks.

Though it doesn't quite tie everything up into a nice tidy package because it isn't the last book in the series, The Time Paradox is full of Eoin Colfer's witty dialogue and fast paced action that readers are sure to love.

If you like Artemis Fowl, you may also enjoy: