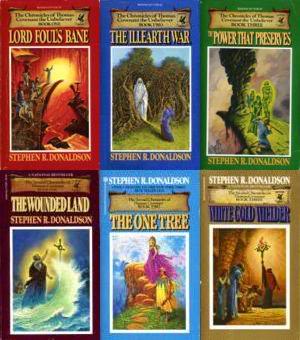 Stephen R. Donaldson's titular protagonist, Thomas Covenant, is in the truest sense of the phrase an anti-hero.

His unbelief in the land, to which he was magically drawn was refreshing and ground breaking in 1977, and after influencing a myriad of newer authors, still is.

The richness of the land and characters adds extensive depth to the story and offsets Covenant's own negativity and unwillingness to be a willing participant.

Donaldson is currently writing the fourth, and final, installment of his tetrology "The Last Chronicles of Thomas Covenant" due out in October of 2013.