I read and love all four Twilight books and decided it was time to hunt for a new book to read. The Hunger Games by Suzanne Collins was it! 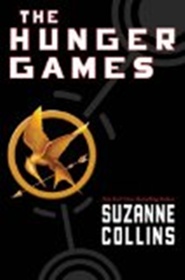 The Hunger Games is the first book in a trilogy, and one of the best first books I have ever read.

The story is about a 16 year old girl named Katniss Everdeen, who lives with her mother and younger sister in Panem- the remains of what used to be the United States.

It's now divided into thirteen separate territories, called districts, and all the districts are controlled by one ruling body... the Capitol.

A long time ago, the districts waged war on the Capitol and were defeated. As a result, the Capitol negotiated the Hunger Games as part of their surrender. Each year, every district must select one girl and one boy to participate in the games.

The Hunger Games are an annual televised event in which the competitors from each district- 24 in all- must fight each other to the death. The only constant... kill or be killed. The last one left standing is deemed the victor.

This year, when Katniss's twelve-year-old sister is chosen by the lottery to appear in the Hunger Games... Katniss steps up to take her place.

Our Review of the Hunger Games Book

This book was so good! I absolutely loved it. The action starts picking up right away and the story is both emotional and exciting.

Though I haven't yet started on the second or third volumes in this series, I am looking forward to getting them both.

Katniss is a young, but very strong and independent leading character and you can't help but like her for the simple fact that she does what needs to be done to take care of her family.

Even more, she's knows how to use a bow and arrow to hunt for her own food, she's not all wrapped up in teen angst and drama, and there's more to life for her... and everyone else who lives in the districts... than the opposite sex and shopping.

Life is hard for them. It's far from the happy place we usually get in fiction books for young readers and it's a nice change.

We loved the secondary characters just as much as the primary ones and love the fact that they're just as strong as Katniss is in each their own way.

All in all, this was a fantastic start to what we expect to be a really exciting series. We're anticipating lots of action for the second and third books and can't wait until Catching Fire arrives. The wait is killing us!!

In the country Panem, they have a special annual celebration to keep the remaining 12 districts of Panem in check. They call it The Hunger Games.

On the day of the Reaping 24 tributes... one boy and one girl from each district are chosen to participate in the games.

They are taken in a lavish train to the Capital, where they are to be poked, prodded, made over and somewhat trained to kill or be killed. And it all happens in a huge filmed arena, where they and the other 23 participants whose names were chosen at the Reaping fight to the death until only one victor remains.

Katniss Everdeen from District 12 volunteers to take her 12 yr old sister, Primrose Everdeen's, place when her name is drawn at the Reaping. The 'lucky' chosen boy from district 12? Peeta Mellark.

Before you are put in the ring, you go threw testing, training, make-overs, and lots of over-pampering to try and win over the crowd.

The more fans you have, the better chance you have of surviving... too many and you put a target on your back (not that there isn't already one of those).

Overall, this was a fantastic book. Enjoyed it from cover to cover on more than one occasion, and listened to it on audio as well. This is a really great book!!